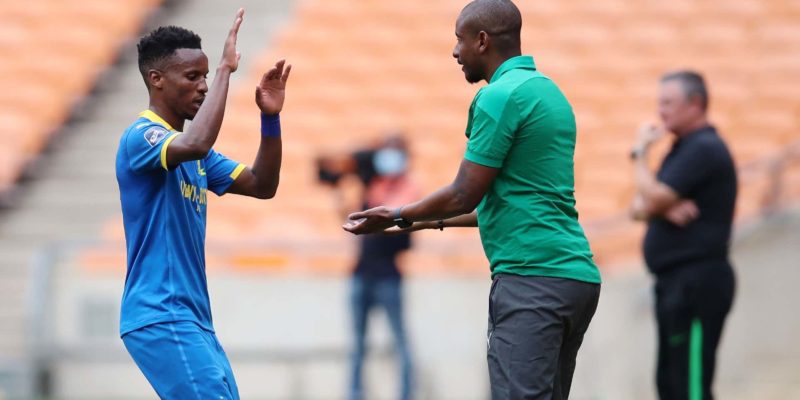 Mamelodi Sundowns co-head coach Rhulani Mokwena has actually blamed Bafana Bafana for their hurt gamers who missed out on the Caf Champions League match versus AS Maniema Union on Sunday.

Lebohang Maboe, Grant Kekana, Divine Lunga, Rushine De Reuck, and Mothobi Mvala were not available for the continental responsibility where Masandawana drew 2-2 versus the DR Congo side, and the coach has actually blamed the nationwide group for the injuries sustained when they participated in the World Cup qualifiers recently.

“We missed Lebo [Lebohang Maboe] and everybody knows the impact Lebo has; he gives the energy in the midfield particularly, in games like these. In the Champions League, we need a little bit more legs to close down spaces when playing against robust and energetic opposition,” Mokwena informed the club’s media department.

“You need very good counter-pressing and the ability to get the next men in the midfield into the attacking half, and normally Lebo gives us that.

“Kekana has actually assisted us keep tidy sheets within the protective line and we missed out on him. Then, regrettably, with the Bafana gamers, it is a really tough scenario due to the fact that, with Bafana, we can not even interact with the medical department.

“There is no corporation in between Bafana which annoys us a bit due to the fact that at the minute, as Mamelodi Sundowns we are constantly, throughout the years, revealed the desire to support the country, support the cause and launch the workers consisting of the assistance structure.

“Mamelodi Sundowns has always put Bafana, in fact in certain moments, ahead of its own cause. It is a bit disappointing that even in the previous camp Thapelo Morena returned injured and he is not fully back yet.

“We are attempting to get him into the group and we provided him a number of minutes [vs AS Maniema Union]. Of course, he has actually gone back to physical fitness and to training, however at the minute he is not at the ideal competitive level where he is all set.

“Then you have the situation of Mvala, who is so important for us and particularly in this African sojourn. His physicality and the ability to win aerial duels, his ability to control and give us a little bit of competitiveness in the midfield were missed.

“Then he originates from Bafana and he is hurt, you understand. De Reuck, in our previous match, versus Swallows, might not complete the video game on the preventive ground however bet Bafana.

“[Thabiso] Kutumela is jaded and overloaded and then comes and struggles with his performance.”

Although the tactician is dissatisfied with the nationwide group, he firmly insisted the club will continue supporting Bafana.

“This disappoints us but OK it is what it is and we have to continue supporting the national course,” Mokwena continued.

“Ours is to focus on what we need to focus on and try to control what we can control. I will reiterate, as Mamelodi Sundowns, we will keep supporting the national course. It is just disappointing that in the last two international breaks we received our players and they came back with injury complications.”

Next up, Masandawana will be up versus Golden Arrows on October 20 for a regional league match.