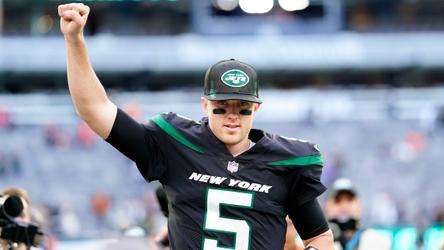 Jets QB Mike White has actually been called the AFC Offensive Player of the Week.

White had a breakout efficiency last Sunday versus the Cincinnati Bengals in what was his very first NFL start, tossing for 405 backyards and 3 goals (and 2 tipped interceptions) in the Jets’ win.

He will begin on Thursday night versus the Indianapolis Colts, however it is unclear what will take place after that.

Zach Wilson is working his method back from a knee injury that he might possibly return from on Nov. 14 versus the Buffalo Bills, and head coach Robert Saleh stated the expectation is that Wilson will have the ability to practice next week.

As far as any prospective quarterback debate that might be developing in between White and Wilson, Saleh has actually been unclear.

“Zach getting healthy is always at the forefront of our mind. But, at the same time, guys — and, again, it’s a hypothetical — you just take the days as they come,” Saleh informed press reporters on Monday. “I mean, that’d be the best thing I can answer. If everything goes according to plan and Zach comes back and he’s healthy, we’ll address it when we cross that bridge.”

“Obviously you’ve seen the play-making ability that Zach brings,” Douglas stated. “A defense has to defend every single blade of grass when they’re going against Zach and his arm. He can reach anywhere on the field. Some of the throws that he makes, the tight window throws that he makes, he can make every single throw. So it’s great to see his play-making ability and it’ll be great to see him develop in this offense with (offensive coordinator Mike) LaFleur.”