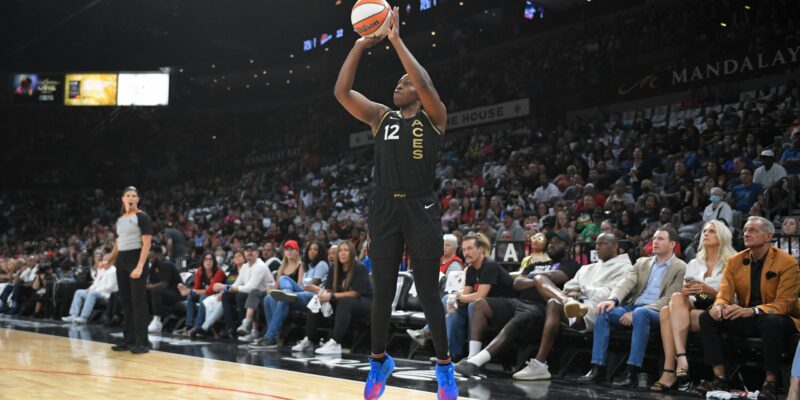 The Las Vegas Aces are up 1-0 after outliving the shorthanded Phoenix Mercury, 79-63, on Wednesday night’s opening night of WNBA playoff action.

Diamond DeShields led the Mercury with 18 points and 8 rebounds. Sophie Cunningham followed up with 12 points, 4 rebounds, and 2 helps.

Both groups had a hard time on the offending end in the 3rd quarter. The groups integrated for 7 points in the opening 6 minutes as Phoenix missed out on 9 straight shots and Las Vegas 7. Wilson made the Aces’ very first basket of the 4th quarter with 7:15 left for a 55-51 lead.

The 3rd quarter was dreadful as both groups integrated for simply 7 points in the opening 6 minutes of the 2nd half. Phoenix missed out on 9 straight efforts while Las Vegas bricked 7. Wilson broke the fourth-quarter ice with an early container that assisted Las Vegas develop some separation.

The Aces developed their will in the 4th quarter with a five-point ownership midway through the 4th quarter. The Aces took a 60-51 lead after Gray was fouled hard by Megan Gustafson. Gray appeared to be in a various mode after the ostentatious nasty. The seasoned point player sank both totally free tosses and struck a triple to get a lead that would never ever be threatened.

“She’s locked in,” Wilson stated per CBSSports about Gray’s 4th quarter efficiency. “When the head of our snake is locked in, it trickles down. We need her to make those big buckets. We know she’s capable of doing it, so I’m glad she was able to showcase in front of a great crowd to end the regular season.”

The @LVAces retreated for the win in the 4th quarter and it was thanks to constant defense.

What resulted in @cgray209‘s hot 4th? Let’s simply state, do not poke the bear 👀 pic.twitter.com/lhfs9cIr10

The Aces will aim to finish their series sweep of the Mercury on Saturday’s Game 2.