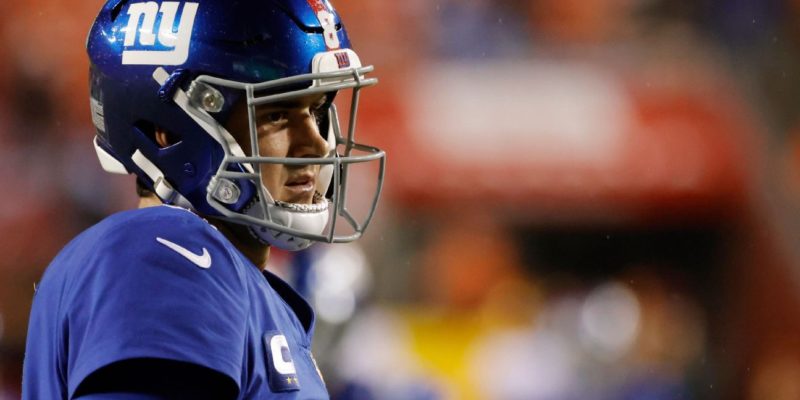 New York Giants coach Brian Daboll does not desire Daniel Jones keeping back. Instead, he’s promoting a more aggressive method that motivates his brand-new quarterback to go out on the field and sling the ball around without doubt or worry of an error.

“Yeah, look, we want to make sure we protect the ball,” Daboll stated prior to the Giants’ 3rd on-field OTA practice on Thursday afternoon. “But again, you can’t go out there and play afraid. Be smart, not reckless, if you will. If he’s got a shot on the right read, let it go.

“There’s going to be things that occur in every video game. The defense is going to make a great play, there may be a tipped ball. We’re going to need to do a great task of looking after the football, however I desire him to turn it loose.”

It’s a change from the past couple years, when Jones was working tirelessly on eliminating turnovers. That seemed to breed a more conservative approach with fewer turnovers, specifically interceptions. Jones threw 17 interceptions the past two seasons, tied for 20th in the NFL.

Josh Allen, who had Daboll as his offensive coordinator in Buffalo, threw 25 interceptions during that same span, tied for second-most among all quarterbacks. Allen also threw 75 touchdown passes and was an MVP candidate both seasons.

“The realities were we were turning the ball over a lot. I was turning the ball over a lot,” said Jones, who has 49 total turnovers since entering the league in 2019, tied for third-most in the NFL. “But I do not understand. I believe as a quarterback you need to have the ability to do both — you need to be aggressive, take shots, however likewise safeguard the ball. It’s discovering the balance there and the very best people can do that. So I’m constantly working to enhance that piece of the decision-making procedure and being wise.”

Daboll, in his first offseason as a head coach, isn’t trying to reprogram his quarterback completely. He’s just looking to find a suitable middle ground that includes some of the aggressiveness that Jones showed in his first professional season under coach Pat Shurmur and the more responsible version that existed the past two years under playcallers Jason Garrett and Freddie Kitchens.

It’s beginning at practices this spring. Jones threw one pass deep down the middle of the field at Thursday’s workout. It was intercepted by safety Julian Love.

“Yeah, you never ever wish to toss interceptions,” Jones said. “But simply the concept to be aggressive. Take your shots. Make something occur. Let the receivers understand we’re going to do that. We’re going to offer you all chances to make plays and we’re depending on you to make plays in scenarios. I believe that is type of a state of mind he needs to assault a defense, attack downfield. And as a quarterback and decision-maker, you’re a huge part of that. That’s something we discussed and he wishes to see at practice.”

Jones isn’t making too much out of it though. He insists it’s not in stark contrast to what he did under Shurmur or Garrett and Kitchens.

But the hope is that possibly it will yield some much better outcomes.