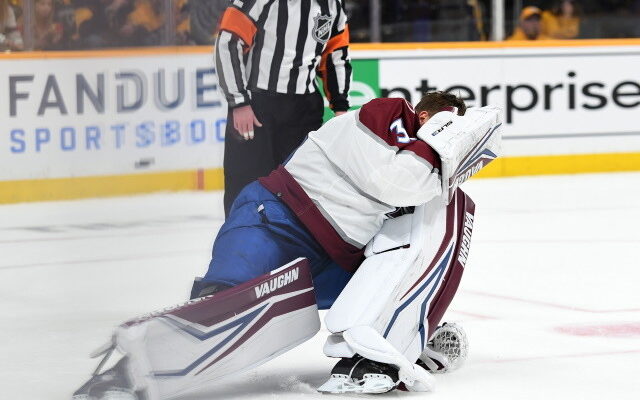 Peter Baugh: Colorado Avalanche goaltender Darcy Kuemper left the other day’s video game early. There is no concussion and it doesn’t seem like it’s going to be long-lasting.

Darcy Kuemper was required to leave the ice after Ryan Johansen‘s stick unintentionally survived his mask and into the ideal eye location.

Nashville Predators: Defenseman Mark Borowiecki missed out on the other day’s video game and is daily.

Pens Inside Scoop: Pittsburgh Penguins forward Jason Zucker went back to the lineup.

Dan Kingerski of Pittsburgh Hockey Now: Penguins goaltender Tristan Jarry was on the ice for the very first time the other day given that hurting his foot. He didn’t take any shots.

Forward Rickard Rakell was likewise on the ice ahead of their early morning skate the other day.

Lou Korac: St. Louis Blues coach Craig Berube stated that defenseman Scott Perunovich is a possibility for today which they had actually simply kept defenseman Justin Faulk off the ice the other day, he is all right.

Loue Korac: Blues defenseman Nick Leddy and Robert Bortuzzo were on the ice the other day.

Chris Pinkert: Blues defenseman Torey Krug will be out for “some time” according to coach Berube.

Jonas Siegel: Toronto Maple Leafs coach Sheldon Keefe on Michael Bunting: “In terms of the injury, I think he’s fine … It’s coming back from an injury and then you’re also coming in and you’re playing in the playoffs for the first time. Especially when you’re gonna play on that (top) line, it’s not easy.”