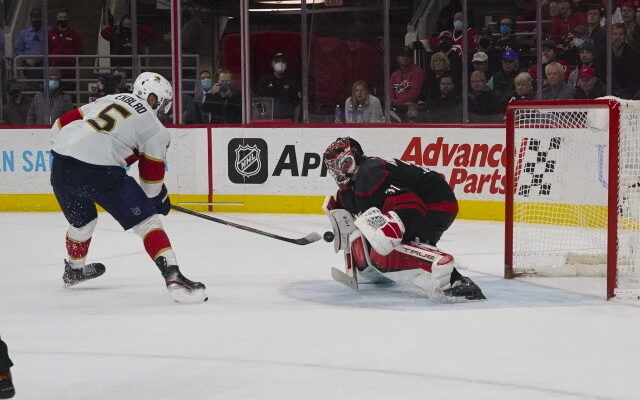 Sara Civ: Carolina Hurricanes goaltender Frederik Andersen skated on his own the other day and will not begin Game 1.

Peter Baugh: Avs coach Jared Bednar stated that “everyone could be an option” when inquired about their group health. Defenseman Ryan Murray is the only gamer that hasn’t been cleared.

Marc Moser: Avs coach Bednar stated that forward Nazem Kadri missed out on practice with a non-COVID health problem however must be prepared to opt for Game 1.

David Dwork: Panthers coach Andrew Brunette stated that “there’s a chance” that defenseman Aaron Ekblad goes back to the lineup for Game 1. He was a complete individual in the other day’s practice.

David Dwork: Florida Panthers Radko Gudas on Ekblad returning for the playoffs: “He’s been our leader since game one. He plays the biggest role on our back end and he was a stud the whole season. Obviously it’s gonna be hard for him right away to jump in Game 1, but if anybody can, it’s him.”

Michael Russo: Minnesota Wild forwards Marcus Foligno and Mats Zuccarello require to state themselves prepared prior to they are one hundred percent in the lineup according to coach Dean Evason.

Dan Rosen: Rangers coach Gerard Gallant hasn’t dismissed forward Tyler Motte for round 1. Gallant stated that he hasn’t begun skating with the group yet however there is an opportunity that he might return at some point.

Pens Inside Scoop: Pittsburgh Penguins coach Mike Sullivan stated that goaltender Tristan Jarry and forward Jason Zucker are daily and included: “We don’t expect to have them for the first couple of games, I will say that. But their status right now is day to day. We’ll update you guys as we go.”

Forward Michael Bunting is uncertain for tonight however they anticipate him back at some time throughout round one.

Thomas Drance: Vancouver Canucks forward Bo Horvat: “I broke the end of my tibia. Luckily there’s no displacement or anything and doesn’t require surgery. It’s a 6-8 week thing.”