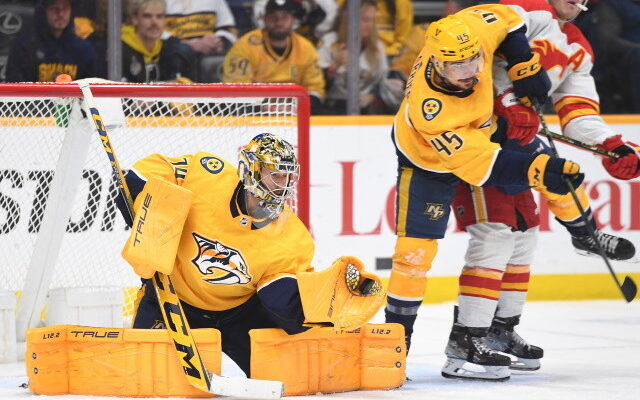 Jesse Montano: Colorado Avalanche forward Gabriel Landeskog was on the ice for their group skate the other day early morning in a no-contact jersey.

Kyle Fredrickson: Avs coach Jared Bednar on Landeskog: “Gabe is good. Taking steps forward. … Still the plan is for him to be ready for Game 1.”

Jack Michaels: Edmonton Oilers defenseman Darnell Nurse hasn’t begun skating and there is no other upgrade.

Alex Daugherty of A to Z Sports: A source stated that Nashville Predators goaltender Juuse Saros has a high ankle injury that might keep him out for 4 to 6 weeks.

Here is what appears to be Saros’s injury. Roughly 7:52 left in the 3rd, his left skate gets hung up on the post. He’s plainly laboring after this and exits at the next whistle. #Preds pic.twitter.com/yTGy8EIuvc

TSN: Chris Johnston on Saros: “The injury that he suffered earlier this week in the game against Calgary was described to me as one that would typically keep a player out for weeks. Now, Saros and the Predators are going to do everything they can to shorten that timeline to get him back as soon as possible. But certainly with Round 1 starting in a matter of days it sounds like the Predators are down to Connor Ingram or David Rittich in their net.”

Brooks Bratten: Predators coach John Hynes stated that Jeremy Lauzon (lower-body) might return either tonight or in the playoffs.

Seth Rorabaugh: Pittsburgh Penguins coach Mike Sullivan stated that forward Jason Zucker was being examined the other day for a concealed injury. He state if it was a brand-new injury or something associated to the core muscle injury he was handling earlier.

David Alter: Maple Leafs forward Michael Bunting skated once again the other day. He’s out with a concealed injury.

He had a great practice the other day and his status for tonight is not understood yet.