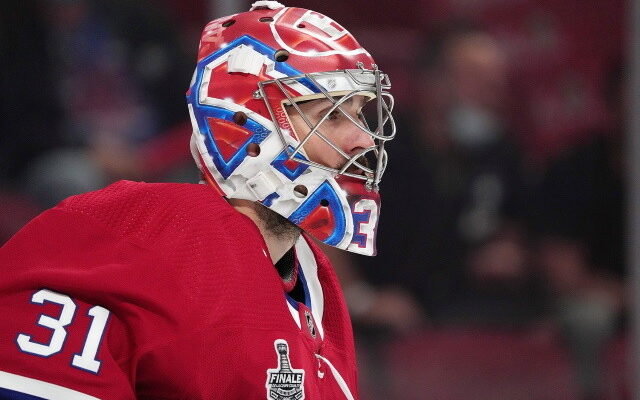 Mike Chambers: Colorado Avalanche goaltender Pavel Francouz will be out for 3 to 4 weeks with a lower-body injury.

Kassian leaves after a battle

Jason Gregor: Edmonton Oilers forward Zack Kassian left last night’s video game after striking his avoid the ice in a battle with Vancouver Canucks Zack MacEwen. He had the ability to skate off on his own with a towel covering part of his head.

Daniel Nugent-Bowman: Mike Smith on Zach Kassian: “I chatted with him briefly. You never want to see that happen to anybody, let alone one of your friends and teammates. It was a scary situation, but it seems like he’s in good spirits. He’ll get some testing done. Hopefully, he’s got as hard a head as it looks.”

Daniel Nugent-Bowman: Oilers coach Dave Tippett on Kassian: “It’s one of those ones that upsets you when that happens … It seems like he’s all right in there. We’ll see where he is tomorrow.”

Renaud Lavoie: Marc Bergevin stated that Price will be out for a minimum of one month however it might be longer.

Posted by Carey Price’s other half Angela on IG. Credit to them for attempting to assist others by sharing their story. Here’s hoping Carey gets the assistance he requires. pic.twitter.com/WLnKSCwqZk

Bruce Garrioch: Ottawa Senators forward Colin White will be out for 4 to 6 months as he’ll require surgical treatment to fix a dislocated shoulder.

Gourde will take a trip with the Kraken

Marisa Ingemi: Seattle Kraken coach Dave Hakstol stated that forward Yanni Gourde will take a trip with the group on their opening trip. He is experimenting the group now.

No problems up until now for Matthews

David Alter: Toronto Maple Leafs coach Sheldon Keefe on Auston Matthews‘ wrist:  “He’s had no setbacks, continued to push. Today’s would have been by far the longest session that he’s had, was there right to the end; I saw him doing a little bit extra himself afterward and getting some extra shots off so all that’s very positive”