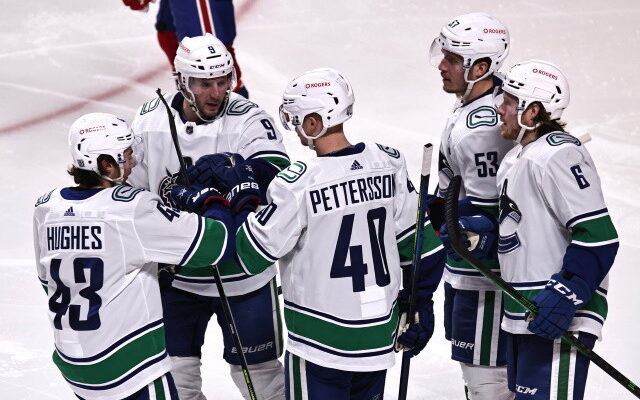 Canucks PR: Vancouver Canucks GM Jim Benning on Travis Hamonic: “We’ve received confirmation that Travis Hamonic will not be opting out this season. He remains at home, dealing with some personal matters. We continue to support him, and out of respect for the situation, we will have no further comment at this time.”

Rick Dhaliwal: There was no upgrade on Hamonic as both the Canucks and his camp keep an eye on the scenario.

The Canucks re-signed defenseman Quinn Hughes to a six-year agreement with at $7.85 million wage cap hit.

Puck Pedia: After the finalizings the Canucks are $2.41 million over the wage cap with a 23-man lineup that consists of defenseman Travis Hamonic’s $3 million agreement. The Canucks can put Micheal Ferland on the LTIR and surpass the cap by $2.41 million, or make a lineup relocation(s) that gets them closer to max the $2.5 million over.

Satiar Shah: “Canucks get Pettersson & Hughes signed to fair contracts, they come in at around the budget they had earmarked for the two young stars. CAA may have squeezed out an extra $100K per player above expected. Both sides come away happy.”

Rick Dhaliwal: Pettersson and Hughes are anticipated to get here in Vancouver .

Matthew DeFranks: Top RFA defenseman agreements that were signed this this year.

Among F who signed their offers as RFA’s & end as RFA’s (bridge offers), he has the second greatest Cap Hit this year behind Laine & ahead of Tkachuk, Barzal & Point.https://t.co/brVs107br9

Among D who signed their offers as RFA’s, he has the 7th greatest cap hit, behind Subban, Makar, Heiskanen, Trouba, Chabot, & Weberhttps://t.co/XqEEEos4Re

Pettersson and Hughes.
I believe the Canucks will be sorry for a bridge offer for Pettersson who is currently among the video game’s finest centers. But they did a good task securing Hughes who ought to recuperate towards being a real #1 defenceman. pic.twitter.com/CGMvT5hCun