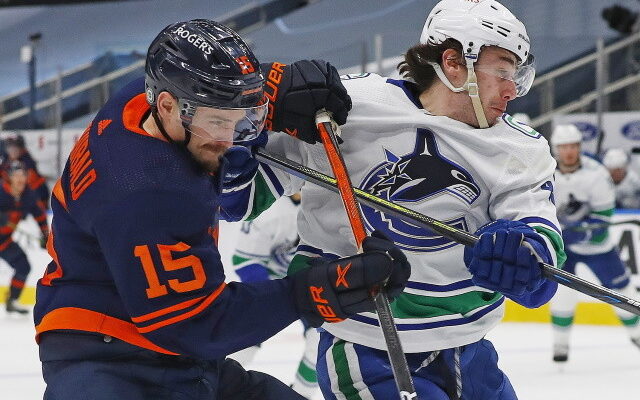 Puck Pedia: Players who were placed on waivers the other day.

Archibald out with myocarditis

Mark Spector: Edmonton Oilers forward Josh Archibald will be out forever. During the offseason, he got COVID and now has the heart disease myocarditis.

The Oilers will be putting him on the LTIR.

Gene Principe: Oilers coach Dave Tippett on Archibald: “Here’s where we are with Arch (Josh Archibald). He’s had a lot of tests. Back half of quarantine he wasn’t feeling right after skating. Tests showed he had Covid. He tested for the antibodies. He’s got myocarditis and is out indefinitely.”

Puck Pedia: WIth Archibald LTIR eligible, the Oilers can send a 23-man lineup to begin the season that has Oscar Klefbom on the LTIR and Alex Stalock and Archibald on the IR. They would be $4.1 million over the cap.

They might then move Stalock and Archibald on the LTIR and be qualified to be over the cap by $6.385 million.

Puck Pedia: “Compensation is most affordable in Yr 1 (greatest escrow 18%).

Lower in Year 6 (possible lockout year), however does not have finalizing bonus offer that year as lockout security.”

Rick Dhaliwal: Hughes and Pettersson’s representative Pat Brisson: “It sure been an interesting process trying to get things to conclusion But we do understand the complexities of getting these deals done at times. We are extremely happy with the end results for Quinn and Elias.”

Jake Evans, signed to a 3x$1.7M extension by MTL, was a low-event fourth-liner in his novice season with the Habs. #GoHabsGo pic.twitter.com/kPttkRr3Q0

Urban Meyer promises to gain back Jaguars’ trust back, states talks with gamers, coaches have actually been ‘dreadful’