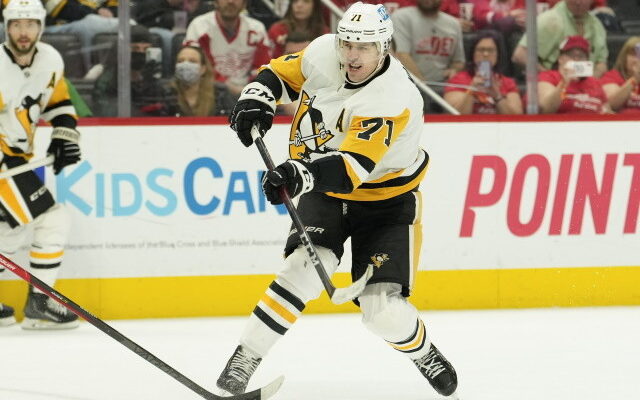 Term the sticking point with Malkin

Don’t believe the Penguins are wishing to go more than 3 years.

We’ll see if that will alter.

Rob Rossi of The Athletic: Sources state term is a problem in Malkin talks.

Earlier today sources stated the Penguins provided Malk 2 years at $6 million per. Malkin might be all right with the $6 million however sources state for a 4 year offer.

The source included that Malkin feels he hasn’t got the “respect deserving of a ‘legacy player’” by the short-term, low cap hit.

Stefen Rosner: Have heard that the Philadelphia Flyers are wanting to trade defenseman Ivan Provorov and forwards James van Riemsdyk and Travis Konecny.

The New York Islanders are trying to find defensemen.

The Flyers and Islanders might be wanting to pursue pending UFA Johnny Gaudreau.

Bruce Garrioch: The Senators are still wanting to make some relocations, including a right-handed defenseman and moving Nikita Zaitsev‘s agreement.

Josh Manson might not be set on a Ducks return

Adrian Dater: There have actually been reports that Colorado Avalanche pending UFA defenseman Josh Manson has his “heart” set on going back to the Anaheim Ducks are incorrect.

Rutherford on J.T. Miller, and a trade with the Islanders might have failed

Rick Dhaliwal: Vancouver Canucks Jim Rutherford on the J.T. Miller scenario: “It is not frustrating, we may never get it done or maybe he re-signs. There is a good chance he may be at camp.”

Rick Dhaliwal: Rutherford on Miller: “He may or may not be traded. We are not going to panic, there is no deadline at this draft to sign or trade him. everyone needs to slow down.”

Stefen Rosner: Heard that a J.T. Miller trade to the New York Islanders failed at the last minute. Isles GM Lou Lamoriello then rotated to the Canadiens and Alex Romanov.