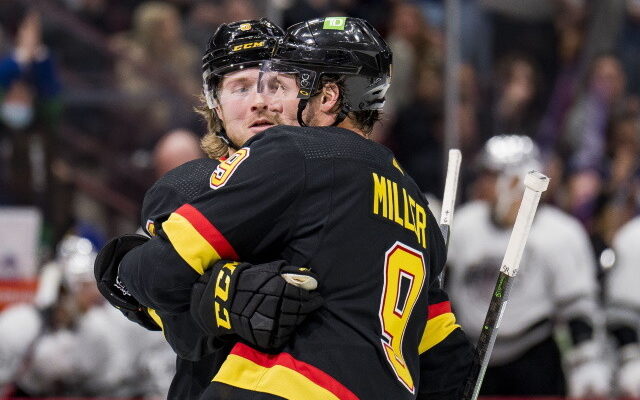 Rick Dhaliwal: Agent Ben Hankinson on Vancouver Canucks pending RFA forward Brock Boeser: “Brock loves Vancouver, it is a Canadian market and he has never shied away. He puts a lot of pressure on himself, I hope we can get a contract done, I have a good relationship with Vancouver management.”

David Quadrelli: Canucks coach Bruce Boudreau on his future: “I told Patrik and Jim that I want to coach here next year. We’re just talking right now. I’m sure — hopefully things get done, but I think they want me back and I know I want to be back so I think it should work.”

David Quadrelli: Canucks Jim Rutherford stated that at this time they are not seeking to bring Boudreau back for longer than next season however he doesn’t see him as a lame duck coach.

David Quadrelli: Rutherford clarifies his remarks: “That’s certainly not to say we wouldn’t want to have him back beyond next year. If he continues to do a good job, we’d love to have him back.”

Rick Dhaliwal: The representative for Vancouver Canucks J.T. Miller, Brian Bartlett on the concept of signing a brand-new agreement with the Canucks: “It is one of his goals to resign in VAN, he wants to help VAN going forward, he would be happy to extend this summer if we can make it happen. We will have some conversations this summer and see where it goes.”

Rick Dhaliwal: Barlett included: “We see value in security, mythology is players don’t do well after 25-30, that is not the case. Stamkos just hit career high at 32. Players take care of themselves. We will see if a new deal comes together or not, I anticipate we will have conversations this summer.”

Jason Brough: Canucks Jim Rutherford on Miller who is getting in the last year of his agreement: “We’re going to negotiate with JT Miller, but if the numbers get out of whack we’ll have to make a non-emotional decision and try to get assets that are going to help the Canucks long term.”

Rick Dhaliwal: Canucks Rutherford on Russian complimentary representative forward Andrei Kuzmenko: “I like him a lot, he is a good player offensively and on pp. We will continue to try and recruit him.”

Trevor May closed down for 4 weeks, dealing with 8-to-12-week healing duration due to tension response