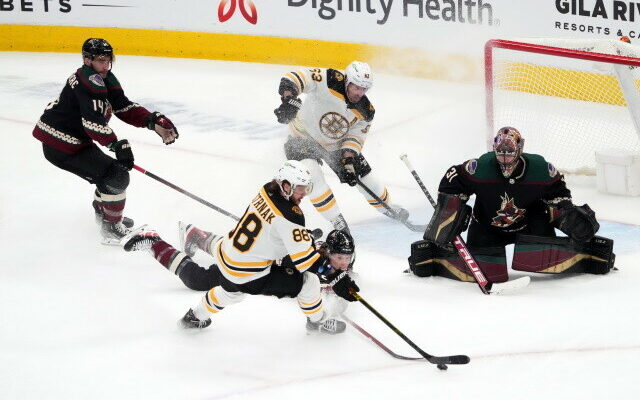 Matt Sekeres of the Daily Hive: Vancouver Canucks forward Nils Hoglander might discover himself on the 4th line or he might be utilized as trade bait.

The Canucks are kicking tires on Hurricanes defenseman Ethan Bear according to Iain MacIntire of Sportsnet. Could the Canucks usage Hoglander to obtain Bear? doesn’t believe they should.

If the Canucks do choose to carry on Hoglander (for Bear or another defenseman), they’d be offering short on him.

Joe Haggerty: Boston Bruins GM Don Sweeney on if they have any issues about agreements talks with David Pastrnak heading into the season: “I don’t think there’s a concern. In a perfect world we sign him to be a lifelong Bruin & that’s always been our goal. Hopefully he & his camp feels the exact same way. That’s what our goal is”

Matthew DeFranks: Dallas Stars GM Jim Nill stated that RFA forward Jason Robertson won’t be at camp when it opens today: “We’ve had negotiations, ongoing steadily the last couple weeks, but unfortunately won’t be there. Hoping he gets there as soon as possible.”

“Let’s hope this comes together quickly. I think he’s disappointed he’s not at camp and we are too. It is very important for a younger player , and, as you mentioned, new coaching staff and everything else. We do have some time on our side.”

Jakob Chychrun still wishing for a trade to a competitor

Craig Morgan: Arizona Coyotes defenseman Jakob Chychrun stated the was all right with the Coyotes deal on attempting to trade him to a competing group rather of going through another restore. An offer certainly didn’t get done this offseason. Chychrun still hopes an offer can be discovered.

Craig Morgan: Chychrun stated that he’ll continue to strive and be an excellent colleague. He wants to be traded to a playoff competitor.

VIEW: Aaron Judge fools everybody in Yankee Stadium, consisting of the cam, when he simply misses out on crowning achievement No. 61