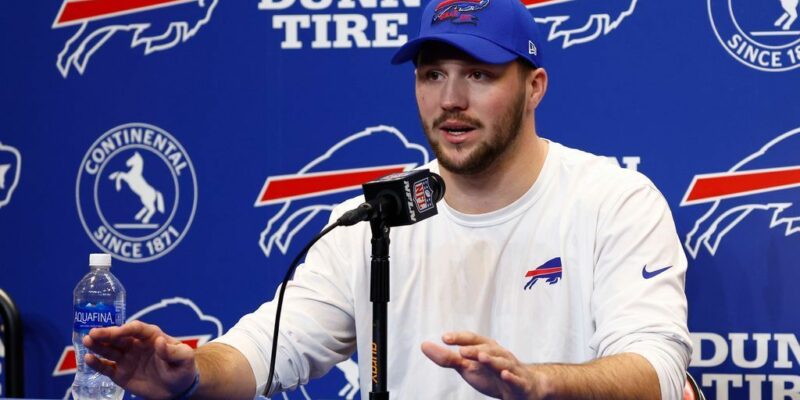 ORCHARD PARK, N.Y. — The worst part of the past three days for Buffalo Bills cornerback Dane Jackson was the unknown.

His hometown friend Damar Hamlin had collapsed on the field during the first quarter of Monday night’s Bills-Bengals game and was in critical care in the hospital after suffering cardiac arrest. While the Bills kept players updated on all the latest with Hamlin, there was still uncertainty about what the future held for him.

“Just as a player, as that being our brother and him being so close, you’re just wondering is he going to be all right in the end,” Jackson said. “So, once we got updates and once we got feedback, it just started to make us feel a little better.”

Jackson shared his thoughts during the team’s first public comments since Hamlin was taken off the field at Paycor Stadium in an ambulance on Monday night. Coach Sean McDermott, quarterback Josh Allen, center Mitch Morse and Jackson all spoke to the media during news conferences filled with a variety of emotions and raw feelings about what this week has been like and how the team has felt comfortable preparing to play the New England Patriots on Sunday (1 p.m. ET, CBS).

The Bills received updates on Hamlin’s condition from general manager Brandon Beane and head athletic trainer Nate Breske, who remained in Cincinnati with Hamlin and his family. The 24-year-old safety is now beginning to awaken as he shows “substantial improvement” in his recovery, per doctors at the University of Cincinnati Medical Center on Thursday. Hamlin is still considered critically ill and has many steps ahead, but it does appear that his neurological condition is intact, according to his doctors.

The emotional response to seeing Hamlin collapse on the field was captured on the broadcast and in photos, and Allen said they will never forget the feelings of that moment.

“You lose sleep. You’re hurt for your brother,” Allen said. “A lot of shared grief but to the question before getting updates and positive updates, eases so much of that pain and that tension that you feel.”

Allen praised how McDermott handled the situation and speaking to the locker room after the team left the field. The coach said that at the time, it was “going to be really hard to put them back out there,” but he gave his players the option to decide. Allen and a couple of the other team captains decided not to go back out on the field.

“We were able collect ourselves and help each other out in the confines of that locker room,” Morse said. “Also had the whole team in a confined space, we could have discussions, conversations not only between ourselves but then Coach putting us in a position to ultimately make a decision. Yeah, I just think there was no way in hell that we were ready to go out there and play a game.

“Even if there were just a few guys who weren’t ready to play, which there were way more, you know what I mean? To play this game, as you know, where you have to be mentally to be on the field not only for yourself and your well-being but for others around you, it just would’ve done a disservice for everyone and there was just no chance.”

The days since the team left Cincinnati on a plane early Tuesday have included members of the organization being together, while also having the resources to do what is best for each individual and to allow them to handle the situation in their own way. A team meeting was held at noon Tuesday with additional counselors on hand to help and hold breakout sessions.

The team spoke with Damar Hamlin’s father, Mario, from Cincinnati on Wednesday, and he told them that they need to focus on the goals that they had set for themselves and said that would be what Hamlin would want.

“Mario talking to us as a team. And the things that he kind of told us, and really, he didn’t tell us, he demanded us,” Allen said. “And you can’t not honor his request to go out there and charge forward, and that to the best of our abilities. And obviously, we’ll be playing with, I guess, less heavy hearts now knowing that [Thursday’s] news was a lot of tears of joy.”

The Bills players began their week of practice for the Patriots game on Wednesday with a walk-through and then held the team’s first full practice on Thursday. While practice was closed to the media, the team shared photos of Allen and cornerback Tre’Davious White giving thumbs-up and various players forming hearts and Hamlin’s No. 3 with their hands.

That conversation, plus the news of Hamlin’s improving condition from Thursday, was a significant boost.

“I think the biggest thing is just hearing from the family and hearing how he’s progressed has really put, to say a smile on our faces would be an understatement,” Morse said. “We were as elated as you possibly could be as a team. It was a really cool moment. And then being able to put the pads on, being able to do a little bit of football today was very therapeutic for a lot of guys. It’s still one of those situations that will keep going, progressing. Each person, like Coach had said before, is going to process this in a different manner. And there’s nothing wrong with that.”

While the Bills get ready to play the Patriots on Sunday, the less important factor in everything that has transpired in the past three days is what it means for the Bills’ playoff future.

The Bills’ game against the Bengals will not be resumed and has been canceled. NFL owners will meet Friday to discuss and decide how the AFC playoff seeding will work, the league announced Thursday.

While all of the logistics are sorted out, the Bills’ focus is on winning for Hamlin and hopefully finding a way to see him in the next couple of weeks with his full personality on display.

“He’s always going to come out with some type of joke or whatever, it doesn’t matter how severe the situation is, he always has a joke,” Jackson said. “Or I know the first thing he’ll say to me when he’ll get back is something crazy, I just know it. I can’t wait for it, honestly. That’s what I’m really waiting for. But that’s just the type of person he is, man. He always wants to win, he’s a true fighter and he’s a warrior.”