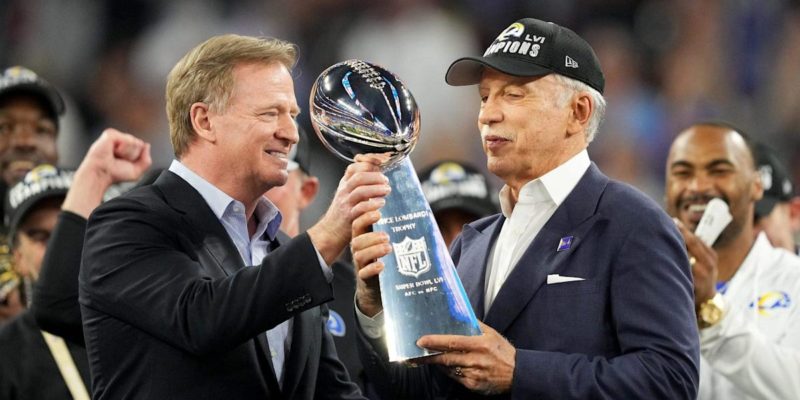 Commissioner Roger Goodell earns money an outrageous wage in part since he’s skilled at openly running disturbance for the undesirable positions and declarations made by his constituents — the 32 owners who pay him that inflated wage. On Tuesday, Goodell needs to openly steer his method through a pointed concern relating to evidence acquired by the St. Louis Post-Dispatch that the Rams and the league (and particularly Goodell himself) understood that group owner Stan Kroenke bought land in Inglewood with a particular strategy to move the Rams there — which the Rams and the league (and particularly Goodell himself) stopped working to inform the fact about it when the concerns initially emerged.

A press reporter, describing the files acquired by the Post-Dispatch, stated the products “make it appear clear to a reasonable reader that the public was misled by the Rams and the league about Stan Kroenke’s intentions prior to that process became public.” Next came the concern: “What assurances can you give fans in other cities that they’ll hear the straight story from the league and their team about their needs and their intentions and their sustainability in their markets?”

“I would tell you, first standpoint, I don’t agree with your assumption on what you conclude,” Goodell stated in reaction. “Second of all, those processes end up being very public. Very transparent. And I think everyone understands exactly what the club needs and what the community wants to do. And they try to work to reach that kind of an agreement. But none of us want to see relocations. We’ve always said we work hard to avoid those. When they happen, they’re painful for everyone. And we do our best to avoid that.”

Because the shotgun nature of an interview makes it tough for significant followup to happen, Goodell wasn’t continued the concern of whether he understood that Kroenke prepared to move the group to the land he’d bought when Goodell stated, at a pre-Super Bowl conference in 2014, “Stan is a very large developer on a global basis. He has land throughout the country and throughout the world. There are no plans, to my knowledge, of a stadium development.”

Indeed, after Goodell completed, another press reporter asked a various concern about a various subject. Threat reduced the effects of.

However, the files from the lawsuits reveal that Goodell understood the fact when he stated this, which the fact was: (1) Kroenke undoubtedly prepared to establish an arena there; and (2) the Rams and the league agreeably chose to hide it.

It is, as the stating goes, what it is. The files reveal that the group and the league understood that Kroenke prepared to move the Rams to the land he bought, which the Rams and the league (and Goodell) covered it up. But Goodell is complimentary to state whatever he desires in an interview setting when asked one, and just one, concern about it.

In post-truth America, the unfortunate fact is that’s basically all we’re ever going to get on the matter.